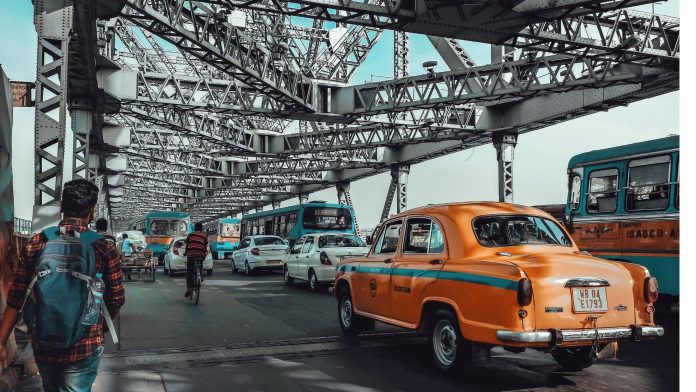 Kolkata is not a city, it is a home, an emotional abode for its citizens. You may go away to faraway places if your employment calls or as young women if you bid farewell to your home and step into a new one, but be rest assured that the sweet breeze of Ganga will always call you in your reminiscence.

While Bengalis are known for their leisurely attitude and a compulsory afternoon nap known popularly all across Kolkata as “bhaat-ghum”, they are also recognized for their graceful beauty in women, hearty hospitality towards their guests, their elaborate and multi culinary food items, and food habits, not to forget their numerous options for sweets that have claimed its name all over the world.

Before the British had invaded the Indians, Kolkata was a constituent of three neighboring villages —- Sutanuti, Kalikata, and Gobindapore. Shortly during the British raj, the Britishers had migrated from the silted up portion of Satgaon, farther upriver, re-naming the three villages collectively as “Kolkata”, in order to reside there. Kolkata was the capital of India till 1912 during the rule of the British, before it shifted to Delhi. Hence, several monuments and buildings carry within itself the intricate British architecture and their glorious footprints.

Kolkata is a hub place for art, culture and is very intellectually challenging. Famous names like Rabindranath Tagore, Satyajit Roy, Abhijit Banerjee, Amartya Sen, Swami Vivekananda, Mother Teresa, Jagadish Chandra Bose, Prafulla Chandra Roy, Subhas Chandra Bose, and countless others lay their origins from this beloved city. Even today, knowledge and heritage can be found in every corner of every street in every para (locality).

Durga puja is the ultimate festival and time for rejoicing the people of Kolkata. Though it is a renowned festival celebrated worldwide, Bengalis residing in different parts of the world will make it a point to reunite with Kolkata during the month of pujo, leaving all their chores and responsibilities behind.

It is a time for unity, harmony, celebration, food, and pandal hopping, but ultimate joy is experienced from laying our lives and devoting ourselves to Maa Durga, the goddess of feminine strength and virtue, and the killer of all evil.

Kolkata and Bengalis pride themselves over the city’s lip-smacking foods as food for us are more of a way of expressing emotion and oneness rather than something that merely satisfies our stomach.

They also take great pride over the literacy and knowledge scattered everywhere, in every human, despite whether you have an educational degree or not, of its cricket and especially the football matches between the two rival parties — East Bengal and Mohun Bagan. There are stories of numerous men who treated the whole locality with boxes full of sweets if their party won the match. That is how protective Bengalis are of their football.

The national library in Kolkata is one of the oldest libraries and is the largest public library in the whole world. As if this was not enough, college street, the street for the accumulation of profound intellectuals from all over Kolkata is also the second-largest second-hand book market in all the world. Bengalis are so confident of this prestigious book lane that it is said that if you cannot find a book here, it can be found nowhere on the earth. And mind you, it is not a mere joke, but actual reality.

Now that we have spoken about Kolkata and its cultural supremacy, let’s talk about the other most celebrated topic in Kolkata —- its food. While the number of dishes and the variations in flavors is hard to name and come to a conclusion, there are a few delectable dishes that qualify as Kolkata’s most popularly delicious foods.

While speaking so fondly of Kolkata’s sweets, it would be unfair to not start with naming the king of Kolkata’s sweets – its Rosogolla or “Kolkatar Rosogolla”, as it is commonly known, as Bengalis have already claimed its supremacy by calling authentic rosogolla belonging solely to Kolkata only.

It is a juicy sweet made by smashing cottage cheese and shaping them into lime-shaped balls and boiling them into sugar syrup till it fluffs up into the size of a big lemon. The process sounds easy and hassle-free but it takes a lot of skill and proper measurements to make one.

The first rosogolla was made by a famous sweet vendor, Nabin Chandra Das in 1868. His family owns the most prestigious shop for sweets in Kolkata today which is of course named after him. There is a Bengali depiction of the struggles of Nabin Das in a movie named “Rosogolla” while he invented his first masterpiece sweet.  Other famous sweets in Kolkata are mishti doi, jolbhora sandesh, kachagolla, rabri and the good old nolen-gurer payesh only found during winters.

Biryani is the most known and popular food in India. While there are many interpretations of Biryani and several cooking methods are explored to cook this complex and detailed dish depending on the regions in India, Kolkata’s biryani is relatively light, supremely aromatic, and with a taste not forgettable.

While this is a Mughal dish, Kolkata’s creativity has found its own excellent interpretation of the dish, and this particular type of dish is again named “Kolkatar Biryani”. It is sold almost everywhere in Kolkata in bulk and in every shop, tastes divine. What is remarkable is the price difference between different shops. If you buy at a street food shop you can get a plate of mutton biryani (the tastiest biryani) for as cheap as 100 rupees whereas in popular to fancy restaurants it can go up to rupees 500-5000. That is why it is said Kolkata magically accommodates the poor and the rich equally.

Phuchka has different names all over India and is a common afternoon-evening street snack in Kolkata. It is a thin ball made by kneading semolina and AP flour and deep-fried it in hot oil, then made a hole in the center where mashed potatoes and other condiments are added, finally dipped in a solution of tamarind water (“tok-jol”) and other spices and then eaten by dropping the whole ball into your mouth for it to burst inside and for you to experience a splash of different flavors. There are also different interpretations of phuchka here in Kolkata but this one is the most preferred and authentic version.

A combination of a spicy, savory, and sweet, perfect balance of richness and taste of fats and health from lentils and vegetables, this mouthwatering thali is the ultimate satiation to your supper craving on a hot afternoon in Kolkata.

There are a wide variety of foods available in restaurants all over Kolkata, but somehow all of the city’s residents are obsessed with their street foods. Be it rolls, chowmein, momo, jhaal muri (a spicy concoction of puffed rice, crackers, onions, chillies and mustard oil mixed artistically), papri chaat (crackers laid in a bed of chutneys and diced tomatoes, potatoes and onions, and other condiments), phuchka or alur chop (potato croquettes), Kolkata’s street foods are the chief source of joy for its people.

There is something about the honking of cars in the streets, the crowd of several people outside the street shop collectively beckoning the cook “O dada amar ta holo?” ( “Brother, how long is my order?”), and the fresh smell of the food cooked in front of your eyes while you are literally salivating the whole time. There is something about ‘Kolkatar raastar khabar’ (Kolkata’s street foods), again.

It is probably how people of different classes and social backgrounds unite, how a conversation about politics is suddenly struck between two gentlemen waiting for their orders, how love stories are made while two people outside the shop find out that they have the same taste in Nizam’s chicken Kathi roll, or even how common office going people deserve to have tasty food but could not burn a hole in their pockets for they have minimal wages but a family of four to look after.

Kolkata is not Mumbai or Paris and probably never wishes to be. Its beauty is in its simplicity and people’s smiling faces. It is called the city of joy.

Yoga poses that can be done by everyone

Myths and taboos about menstruation