HomeSocialExample: How to write an OBSERVATION EXERCISE (the Fish market)
Social 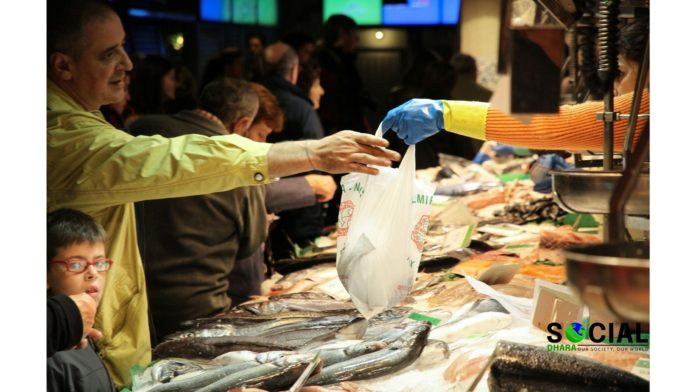 It was evening and the place was below the Santra market bridge, Nagpur, Maharashtra. It was a narrow path and was very difficult to walk freely. Two policemen were managing the rush on these streets. There were so many people in the fish market primarily for buying fish with no social distancing being followed amidst the pandemic but most of the people were wearing face masks. There were also shops of vegetables, fruits, and masalas, etc. in certain numbers. The market is on the footpath of 600-700 meters and around 45-50 street vendors are selling fish and other stuff. Of them, two women were selling fish and others were respectively men. They were mainly selling four varieties of fish like Rohu, Pathi, Moa, and Bhokan.

This street market is illegal, as in one of the dashboards it was written that ‘using this business place is a punishable offense’, but still it was running with full flow. The market starts after 6 pm every day due to heavy traffic during day time. One municipality vehicle was keeping an eye on these vendors and was taking a daily fine of Rs. 100 per shop. The price of the fish which vendors are selling depends on the variety of customers, vendors, and other customers.

Many people were returning from their work and buying fish on their way home in the evening. Most of the people who were buying fish at this time were working-class like daily wage laborers with an age group between 20-50 years and were both men and women. The majority of the sellers on these streets were of the Muslim community and resides in the nearby place from the fish market. The shops in this street have temporary settings which were nothing but wooden or thermal boxes in which they kept their fish. Almost all the shops were carrying the traditional manual calculator for weighing the stuff they are selling. There was a seller who was selling fish and was in his upper middle age and was telling me that he used to be a daily wage laborer which was not a good option for the sustenance of his family livelihood. When he shifted his livelihood to selling fish, he earns 12-15k a month, which he thinks is enough for this daily sustenance.

As it was a street market, the hygiene maintenance in this place was not up to the mark. The Customers seem to have no problem with the poor hygiene being followed by the vendors, all they bothered is about bargaining for fish and other stuff. The rush from the customer was at a peak from 7-8 pm. There was no awareness regarding plastic use, very negligible no of people brought just bags otherwise all were buying in plastic bags. The garbage was spread in all parts like plastic packets of packaged food, rotten vegetables, etc.

A railway bridge can be seen at 50 meters from the market where trains from Nagpur railway keep passing by through the day. The street light from the market provides a source after the sunsets. The bustling area is always busy with people, buses, bikes like any other day. The fish market also moves with the time loops as the number of customers gradually decreases as time goes there are rarely around 50-60 people in the market after 10 pm. The seller starts packing their boxes with the remaining fishes and as they are done with packing they clean and sweep this respective sitting place and around 11:00 pm they move towards their home with a fired body and a sense of relief after evening some money thus the scenario of the market and with an emergence of night.

The market was also a perfect combination of different class as there were employees, police officer, laborers, housewife, this tells us how at a certain level we all are joined to the basic system though we are very much different in terms of social aspects of a rainbow of class /caste as to be seen it can be seen in such market. The fish market serves as the best place for buying fresh seafood, especially fish. Though the market is being illegally run by street vendors, this market is very popular all over the city and is at the primary location for food business. As the majority of vendors stay in the nearby areas from the market, access to this market for vendors is very easy and it saves the traveling cost of vendors. The market seems to be expanding day by day as new vendors started moving to do business in this area. The fish market serves to be a good livelihood option for many communities residing nearby fish markets.

Also Read: Example: How to Write a REFLEXIVITY STATEMENT