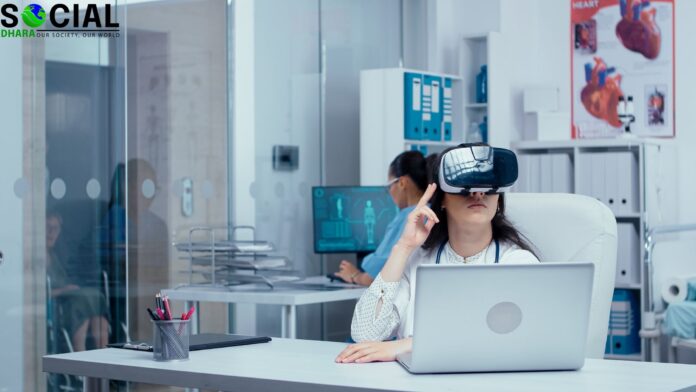 All of us used to have crazy fantasies in our childhood. We wanted to glide over the highest cloud. We wanted to look for mermaids in the dark deep ocean. We even wanted to teleport from one place to another by the time of a snap. While we were playing video games, we wanted to be inside it. All these fantasies are practically impossible. But virtually possible.

We can see the Eiffel Tower without going to Paris. We can fight in a battle holding an AK-47 gun in our hand or simply we can sit and enjoy the tides of Whitehaven beach from our home. All we need is the most trending gadget that is helpful in each and every field which makes impossible dreams possible. Virtual Reality or VR is the most underrated and creative invention of mankind.

Virtual Reality is the use of computer technology to create a simulated environment with 3-dimensional images, gives us a lifelike experience similar to the real world.

The first machine of virtual reality was invented by Morton Heilig in 1957. He named it Sesoroma. It displays 3d images with a stereo sound system. It was the foundation for VR. In 1965, the first head monte display model was invented by Ivan Sutherland. Jaron Lanier added tracked gloves to the previous versions in the year 1987. He was the one who coined the term Virtual Reality to the world for the first time.

In the ’90s new arcade machines were highly available, especially for VR video games. Upgrades like 3d visuals and the resolution of 276 by 375 took place at this point. A new game called ‘Virtual Boy’ was released in 1995. But this portable model was an absolute failure due to the poor graphics used in the game and the expensiveness of that device. This failure stopped the first season of Virtual Reality for almost 10 years.

On 1st August 2012 Sony company launched Kamark’s prototype, Oculus Rift. It started a new era for VR. The Facebook company then bought Oculus for 2 billion in 2014 after its success. Samsung Gear VR, Sony Play Station VR, and Google Daydream VR are the few active gadgets in the market at present.

Where do we use Virtual Reality?

VR helps in handling phobias. Everyone has their fears. Some may get panic about animals and others may be scared of the dark or afraid of heights. These might show a negative impact on our life. If we want to get rid of those fears, we can practice staying in such conditions using VR technology.

VR is also used for paralysis cure. It helps the patient to gain some control on his legs by activating few brain cells which works for the mobility of legs.

For many of us, speaking in public or facing an interview is the biggest task as we don’t have enough social skills while compared to others. VR helps such people to practice interactive skills virtually. This also helps people with Autism and Post Traumatic Stress Disorder (PTSD).

Gaming is one of the biggest platforms in the world. Gamers always strive for a realistic experience while they are playing. VR technology totally changed the way gamers play the game. Now gameplay became more realistic and the gamer feels as though he is inside the game.

Employees who trained for dangerous work face a constant threat of physical harm. VR completely eliminates the risk while training as the trainees face those dangers virtually.

Medical residents can practice operating without involving patients and will learn how to react spontaneously in emergency situations.

VR is used in car safety testing. Car engineers can get a better view to know whether the car is in good condition or not. The customers who want to test a car don’t need to get in and drive it. They can do a test drive virtually.

These days house brokers using this technology to show the house to the customers virtually by sharing the whole 360-degree views with them. The customers can see their future house from their current home without moving a muscle.

The present model of VR cannot give a complete experience. Though it is known as Virtual reality, it won’t provide you with completely realistic visuals. It only shows an animated environment most of the time. So, we can learn basics and moderate skills using VR but to get advanced skills we cannot rely on it.

There is a chance to show faulty results sometimes. It depends upon who developed that particular VR. So, we cannot jump to conclusions just by testing through VR. We have to recheck the answers for accurate results.

Also read: The Impact of Smartphones on the Development of Children

Motion sickness is one of the drawbacks. If your VR couldn’t coordinate with head movements, you will end up with several problems. Motion sickness causes dizziness and vomiting.

The most serious problem using VR is that we might be too addicted to it. There are chances that our minds might encourage to choose VR over real life. There are other possibilities that few may never come out of that addiction.

The graphics will be more realistic and the headsets will be replaced with light-weighted goggles similar to sunglasses. Present VR only providing sight and sound. In the future, there will be extra senses like smell, taste, and touch.

The VR industry is growing rapidly day by day. According to the estimation of PwC, the value of the VR industry will expand from $13.5 billion to $450.5 billion over the next decade by the year 2030.

Our nature itself is a beautiful place besides humans build another world on the earth to make it look more attractive. There are a lot of places to explore, so many countries to visit and so much to learn. There are few things that we can never experience in the simulated world. Even though the future VR can give us a more realistic experience, it won’t take over the beauty of the real world.