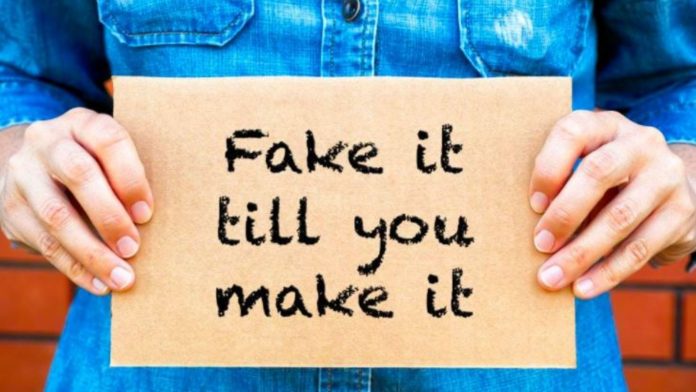 There’s a popular saying in English ‘Fake it till you make it‘. Now, many of us wondering there is a negative word FAKE and that implies scam, fraud, lying, or deception things like that. Although, faking doesn’t mean that one is lying or making false claims that can’t deliver. As it completely depends on the mindset of the person how they are perceiving it and understanding this statement and at some point where a person has slow esteem then the other quote which is comparable to this is ’Believe it till you achieve it’ mantra can be used.

Ever caught in a situation where you are speculated to speak up about something and you are just too afraid and feared that you hesitate to do so and you think that you can’t do this but suddenly you just trick your mind to do it and everything will be okay. Yeah, so this is how faking it works. We all do lie every day and then say lying isn’t a good habit? There’s also a saying that it isn’t lying if it’s for the benefit of others or yourself and in my opinion if it is for the good sake of yourself do lie or fake and that is how life is! Does that 50% sales or no chemicals added or sugar used or contains fresh and raw material are they all not lying? But if we glance deeper in a technical way then the answer is they aren’t lying because they use the tactics to make our brain understand the thing.

Benefits of “Fake it till you make it”

From our childhood we are taught by our teachers, parents, and society how to speak, eat, act, and study always being their puppets and mold yourselves according to what they have said to us. The thing is that we are never allowed to being yourselves and have that self-portrayed image to impress everyone out and that same process continues throughout our lives. Many of us want to escape from the reality and set a world where we become someone entirely different from what we always want to become.

When you focus on yourself that what the real you come out breaking all the barriers that have been put throughout your lives and faking for the sake of your happiness and good is more importantly a self-therapy. Give yourself a personality and a good external environment that also really affects your thinking ability.

Open visual communication and voice controlling while faking it takes time these are the keys to change oneself. The more you practice these things more you become natural to it then one can know how and where to use these tools and that is what transforms a person.

Does it works everytime?

The success mantra is always to look at what’s working rather than what isn’t and ignore it and focus on what things working for you. Once you develop this habit you see changes strategically. But don’t fake to an extent where the other person caught you instantly.

When and how to implement?

Also read: Right Career Path – For one who aspires for higher education

Should we fake it?

If we look in deeper meaning we see that there aren’t certain psychological facts behind this. It is just a mere fact that people usually use to trick their brains out so that they can encounter and face challenges. Sometimes there are positive effects of it’s and negative too. As it depends on how one convinces their brain to work and think in that desired way.

People think that controlling their emotions and feelings will make them productive and not distracted different people. They tend to bounce their feelings back which is not a growth, do the work you love. Faking accurately isn’t being called fake. Sometimes it is about changing your interests in things rather than to be trying to see how others see that.

Faking every time isn’t worth it but still, it is a great strategy in the present scenario if one wants to be happier. As also luck doesn’t work every time in the race of faking we forgot who we are. Do it with the right tactics so that one doesn’t fall into its trap. In the long run, one needs to be presumed and fake till you are in a state where there is a win-win situation.

Faking or characterization are the things that help you to change the world where one presumes themself to be different from actually what they are. When you realize and break the barriers in your life it was not about faking it, but realize that a new person was just inside you all along. Faking or acting is the real natural thing that one can do.