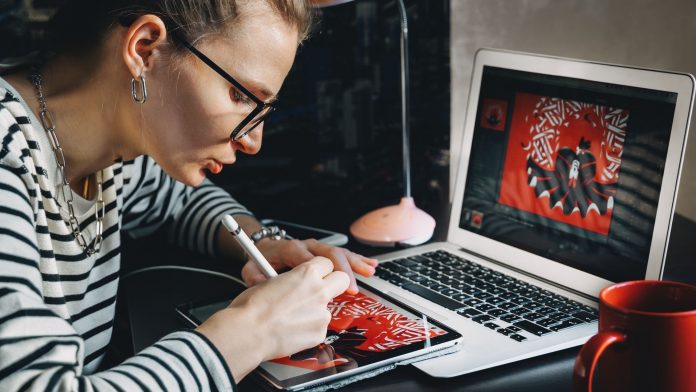 When the computer was first proposed and invented, many knew the heights of wonder this device would achieve, and the wave of change it will bring in the coming decades. Almost everything would be adopted in an online platform via computing machines transforming it to be more accessible if not better. From education to entertainment, jobs to banking, every sector saw a radical change with the inclusion of computers and technology. So did the field of art, with the birth of a new medium, coined as ‘digital art’. Digital art is a method or technique of creating art pieces that incorporate technology in both the creation and presentation of an idea or vision through artwork.

The 1960s marks a significant period in the history of digital art since this was when artists started to experiment with computers. It was during this time that John Whitney considered one of the “fathers of computer graphics“, created the world’s first computer-generated art. He used mathematical functions to transform visuals while making his artworks.

The first successful digital art ever made was when artist Frieder Nake entered an algorithm straight into a room-size ER 56 computer while studying in Stuttgart, Germany, that mathematically translated a 1929 Paul Klee picture.

In the early 1980s, the term “digital art” became popular as computer engineers created a paint program that was used by Harold Cohen, a pioneering digital artist, and AARON, a robotic machine that can create original artworks, was born. AARON has still been in ongoing development, since 1973.

Discussing digital art, one has to be aware of the distinction between raster art and vector art before diving into the depths of digital art creation. The key difference is raster artwork is composed of pixels aligned in horizontal and vertical rows whereas vector images are composed of lines and curves. This brings in the difference in the quality of the image during the enlargement or zooming of both formats. Raster art significantly loses image quality when zoomed in and is saved in formats like .jpg, .psd, .tif, .gif, etc. While vector images retain their resolution and intricate details even when scaled to any size. Common vector file extensions are .svg, .eps, .emf etc. Raster images are easier to share and upload as they are stored in widely compatible file formats. While vector images can be saved as a raster image, vice versa isn’t possible. One can explore and opt for any of the formats as per their comfort and interests.

There are many types of digital arts for industrial and media purposes, and more seem to be developing in the coming years depending on the development of newer technology as well. Some of the mentionable types and forms currently popular in the market are Data moshing, Algorithmic art, Pixel art, Fractal Art, 2D Vector, and Raster Paintings, 3D modeling, and Digital painting, Photo Bashing, Digital Collage among many other forms of growing art styles. One ground-breaking art form that has completely broadened all limits of imagination and conquered all limitations of visualization has been the VR (Virtual Reality) painting. Originally developed by Skillman & Hackett, Tilt Brush is a 3D-painting VR application made available by Google, which has now made it open source, i.e., in layman’s terms anyone with the required knowledge will be able to create their own version of the app. Other similar VR painting apps include quill, AnimVR, Tvori, Gravity Sketch, etc available over a variety of platforms. So, with the required gears, VR headset, touch controllers you will be able to draw or sculpt in 3-dimensional space!

With the pandemic hit, many forms of art and skill gained more attention and limelight, thanks to social media and people spending comparatively more time on it as they sat at home; digital art and related courses saw an uprise and gained a fan following of its own. More people are trying out this new form given the availability of many free and user-friendly software that makes creating digital art pieces easy even with no prior knowledge.

As a beginner, to set up, you can use any computer and just a mouse for creating vector artworks. For raster graphics and freehand drawings, one can opt for touchscreen and convertible laptops, tablets with a stylus, graphic tablets, etc. Even smartphones and a stylus are enough, as there are popular drawing apps for easy download as well.

If you too want to try your hands on creating digital artworks, a few of the most beginner-friendly, easy to set up, and free drawing software and platforms are listed below:

It is an app and drawing platform for mobile devices and tablets for both Android and iOS operating systems. It is free to use with in-app subscriptions, with an extensive set of brushes, fonts, filters, screen tones, and blending modes. It also offers photo editing options with full-color palettes and is quite popular for manga and anime-specific drawing features.

Adobe Illustrator draw is a special version of Adobe Illustrator; it is an app for touchscreen devices that offers easy functionality and flexible settings of opacity, brush style, smoothness, gradients, etc. Similarly, Adobe Illustrator is also a widely used tool for vector graphics creation and design using a wide range of tools like pen, selection, paintbrush, and pencil tools.

Krita is a digital painting as well as 2D animation software by artists for artists. Developed by Krita Foundation and KDE, it is available for download over systems like Windows, macOS, Android, Linux, and Chrome OS. It is considered to be great for drawing comics, anime art, etc. Each brush can be customized and saved along with other several drawing-assistance tools.

Previously known as Autodesk Sketchbook, it is easy to set up and use, raster graphic drawing software with many drawing aids and beginner-friendly interface. With a few trials, you get familiar and used to the workspace. The brush palette is quite sufficient in itself and most settings are easy to understand by amateurs. Although, after the ownership change, the free version of the software is discontinued. The original app should still work but won’t get any updates. The paid version is available for download as well.

This software comes pre-installed with the latest versions of windows and is a very basic and limited drawing tool. It offers a small range of drawing tools and brushes with limited features to use. But the best part is the 3D objects which can be viewed in different perspectives as well as modified to desired illustrations. Numerous patterns and models can be combined by positioning at specific depths to create scenes and plots. All in all, it is great for kids as well as amateurs looking for something simple yet creative.

Digital Art is a great area for exploration especially for art enthusiasts, who might be looking for different ways and mediums to execute and implement their creative ideas and expressions. With the abundance of free tools, software, tutorials, inspirations, popular artworks available all over the internet, and art influencers, learning something new cannot be easier in this digital era. After all, it is about finding activities we enjoy that can provide desired creative freedom.

Gitanjali Deka
Gitanjali is an engineering student at NIT Silchar. She is an ardent art enthusiast and a cinephile. She likes informative writing and coming across new topics in the process.

5 Yoga poses that can be done by everyone

Law of attraction and techniques to attract desires

Connection Between Mental and Physical Health