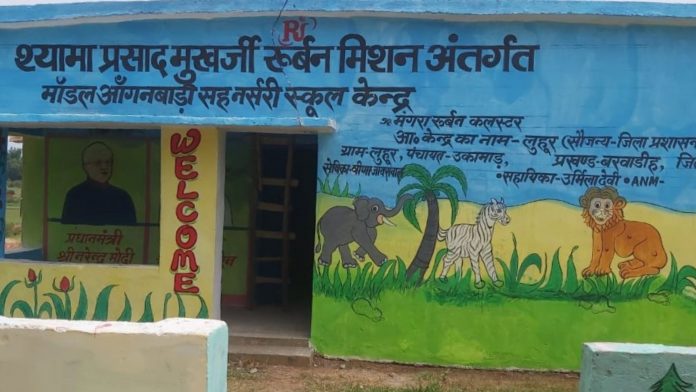 The objective of the Rurban Mission is to stimulate local economic development, enhance basic services and create well-planned Rurban clusters. With an aim of progressive development, the district administration is focusing on Livelihood, Social Infrastructure, Health, and Nutrition. The team has led the formation of the basic model under the Rurban Cluster.

Latehar is a forest-covered agro-based district. The villagers depend on forest products viz. sal leaves, bamboo, etc. for their livelihood. People of this area faced a lot of difficulties due to unemployment and less scope for other livelihoods. Here, the flagship program of the central movement played a game-changing role in terms of livelihood generation and lifestyle change resulting in significant improvement of people’s living standards.

As we move forward with this article, we will be looking at some of the progressive efforts made by the district administration.

The condition of eleven villages of Mangra Rurban Cluster under Shyama Prasad Mukherjee Rurban Mission is uplifted now. Every road and lane is shining with light. People from the cluster feel safe. They are not afraid of wild animals now. There are 299 units of solar street lights installed in 11 villages of the cluster which shines for about 10 to 12 hours daily at night. Solar street lights have a technical provision to automatically turn on when the sun starts going down. All public places viz. community buildings, Panchayat Secretariat, religious places, health centers, etc. are illuminated with solar lights. A primitive tribe residing at Parhiya Tola area in one of the villages has also been covered with light. Farmers and women feel safe in their movement at night. Children enjoy at night playing carrom and other outdoor games.

A herd of elephants regularly passes through the village of Muru. Earlier, many houses were ravaged and people used to get injured by the elephant attacks, but now the problem is much manageable due to the availability of solar lights at night as people from the village tend to become alert after sighting any wild animals from far away.

Earlier maximum Anganwadi centers in the district were dysfunctional. The basic facilities provided by Social Welfare Department did not reach these centers. This affected children in their daily attendance on the lower side. The DC identified the issue and focused on the establishment of AWC in tribal areas with basic facilities. Now, the Anganwadi centers are not only providing basic pre-school facilities but also necessary equipment and interactive learning materials.

The Anganwadi centers are now refurbished with attractive colors, a playschool facility room, a modern classroom, a kitchen, and child-friendly toilets. The colorful and new attractive furniture is placed for children to enhance the feel-good factor. The walls are well painted with interactive paintings which makes it easier for children to learn and understand. The wall is painted with pictures of vegetables, fruits, animals, and so on in both languages Hindi and English.

Anganwadi sevika is now well trained by the concerned department. DC, Latehar inaugurated 17 Aanganvadi centers in Tribal Rurban Cluster. As a result of the above factors, the attendance of children is increased. A healthy teaching environment, nutritional supplements to children, pregnant and lactating women, counseling services, vaccinations, etc. are being provided.

Women farmers of the Mangra Rurban cluster have been cultivating medicinal plants in their barren land which used to be unused and unfertile for years. Earlier, the farmers had lost their confidence, but today they have converted the barren land into cultivable land which brought their lost trust and confidence. Cultivation of medicinal plants i.e. Lemon Grass and Tulsi have given a new identity to the women of the area. Rurban Cluster Mangra emphasized on utilization of advanced technology of farming, and efforts were made to bridge the connection of the women farmers with modern farming systems. Under the Rurban Mission, Lemon Grass Processing Unit has been set up for women farmers through the Jharkhand State Livelihood Promotion Society at Amdiha Village, In order to prevent migration and promote self-employment in the Rurban clusters, a unit has been set up to manufacture medicinal tea, hand wash, soap, etc. from the leaves of Lemongrass. The oil is easily sold in the market because of the deep and strong roots of lemongrass, it helps in preventing soil erosion. Mosquitoes do not breed around lemongrass.

Now, the women farmers have land ownership, access to technology, credit, and agricultural training. Production of Tulsi and Lemongrass has gone up significantly in the cluster. The Rurban mission supported more than 250 woman farmers in their better livelihood through tulsi and lemongrass cultivation. The land area ranging from 25 decimals to 1 acre was identified. The barren land of members associated with SakhiMandal was marked. The first batch of Tulsi and Lemon Grass was planted on about 17 acres of land. 1150 liters of oil were sold which gave farmers a net profit of Rs. 55 thousand, the same was sold by Tulsi Oil for Rs. 1750, which gave earning of Rs. 22500.

Processing of puffed rice, a way for healthy lifestyle

Women were provided new means of employment for making them financially strong. Today all these women are doing the puffed rice business and earning additional income. Community-based schemes were identified for the people here due to the absence of a better source of livelihood. The Mission held frequent meetings with the women of the group through which it was found that the production of puffed rice could prove to be a better alternative to these livelihoods. The department set up production units for two groups. The group members were given training accordingly. Rice, packaging plastics, hand sealing machines, LPG gas fuels, etc. were arranged for these members associated with Sakhi Mandal.

The group member shared their feelings after joining the mission. They said ‘recalling the earlier days of joining the Rurban mission, tears welled up in my eyes. They say to fulfill the needs of the house, a loan had to be taken from the moneylender, to meet the needs of the house, a loan was to be taken from the moneylender. The family members used to migrate for 6 to 6 months, but now the situation is changing. Everyone works together in the processing unit. They sell the finished material in the local market. Today, they found a solution to all the problems united. Children go to school regularly. They are getting sufficient nutritive food.

The changing picture of remote areas realizing under Mangra Rurban Cluster. If you discuss villages and think that it will be a lack of infrastructure with Kutcha road, flooding road then change your view and visit Mangra Rurban Cluster. It is possible only by the team effort under the leadership of the Deputy Commissioner. Now under the leadership of Deputy Commissioner, Kutcha roads have turned into colorful Paver Block roads, running vehicles on roads, school-going Childrens, Mobile in every family, electricity connection and Solar lights can be seen easily on 11 villages under Mangra Rurban Cluster. It was very difficult to walk during the rainy season even villagers used to take Footwear to cross the muddy roads but days have gone and 83 units of Paver Block roads were constructed and villagers can move easily even in the night. Model school in villages, Solar based irrigation system, Cold storage room, Rural haat, Health care center, library, and Science laboratory, etc schemes approved and likely to Start works under various villages of Mangra Rurban Cluster.

24 women from Mangra and Ukkamad villages, 65 km away in the Latehar district, are changing their lives by making dona-pattals. Leaves made by them are being used extensively in marriages, as well as being eco-friendly, they are in great demand in the local market. Under Shyama Prasad Mukherjee Rurban Mission, women of the primitive tribe Parhiya community have been linked to livelihood enhancement. It should be known that the Parhiya tribe is on the verge of extinction, on which UNESCO has also expressed concern. In order to provide local-level employment to the women of Pragati Self Help Group and Chandni Self Help Group, two units of the sewing center were established under rurban mission. In earlier years, saal, mahulam leaves were stitched with each other to prepare the pattal that was time-consuming. Over time there was a need to change the way of making it. This work is now done by modern machines. This work is becoming increasingly popular among women because it has changed their economic status. There has also been a big change in their social status.

These women associated with self-help groups were given training through the department, after which they started the business of making dona-pattal. Through this, she is giving impetus to the protection of the environment along with the women empowerment of the society. These women have taken training in making two-leaf with machines. With this effort of women, now other women of the area are also becoming aware.

Women associated with Pragati Self Help Group and Chandni Self Help Group together with the women of their group prepare Dona-pattal through the machine. Kunti Devi told that it was difficult to run the house on the earnings of her husband Dukhan Parhiya alone. Now she herself earns 100 to 200 rupees a day. He himself buys vegetables and vegetables and other things. Taking care of the education expenses of the children. It is an honor to do so.