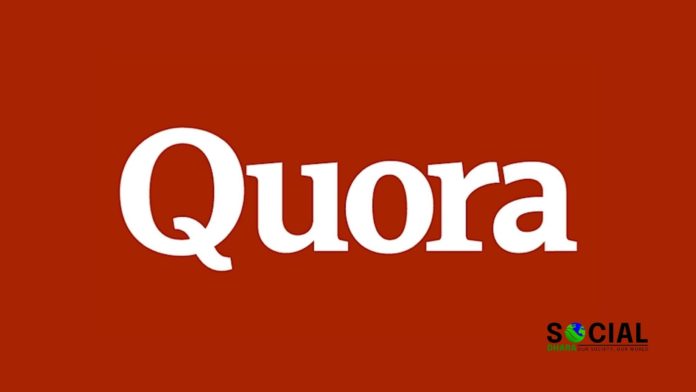 A website is defined as collection of web pages and content which is identified with specific domain name and published in web server. There are over 4.45 websites available in google and increasing every day. Websites are created by various interest group viz. personal, corporate, government, organization etc. with specific purposes. Constructive critiques of website are made for making it more user-friendly. The internet has become most important thing in human life because of its utility in daily life in simplifying tasks. There are many question-answer forum available in internet viz. Quora, Stack Overflow, Yahoo Answers etc.

Quora is a ‘question answer’ website founded by Adam D’Angelo and Charlie Cheever in June, 2009 where questions are asked, answered, followed, and edited by users. The website is registered as private entity named Quora Inc. based which is based at Mountain View, California, U.S. In 2019, 300 million unique visitors were reported in a month. According to Wikipedia Quora question-and-answer is available in 24 languages, have 200-300 employees (Yrs-2019) and generated revenue of $20 million (Yrs-2018). The website is written in Python and C++. According to Alexa the website rank at 372 (28.09.2020) worldwide. Quora is available for both Computer and Mobile with allowing users to post question-answer. Quora has 3,818,649 pages. It has added a “Stat” feature for users to get summary of people’s reaction i.e. views, upvotes, shares of their questions and answers. Zhang et al. suggested that Quora should use polarity-based sentiment analysis to help discover text polarity and words which are combined into sentences.

Quora has provision of real name which requires users to register with the complete form of their real names, although verification is not required. Quora has developed their own algorithm to rank answers. They use technology of ‘Amazon Elastic Compute Cloud’ as hosting server for the website. Quora provides ‘home feed question recommendations’ which personalized user’s preferences of relevant questions, ‘Daily digest’ through which Quora sends daily email. Quora provides content moderation features of upvote and downvote of ‘answers provided’ based on user’s choice. User can report in case of plagiarism, harassment or incorrect information. User can edit or make changes in an answer with the approval of author.

Quora succeeded in ranking top 500 websites across the globe. However, it received criticism for being ‘horrid service for blogging’. Quora was highly criticized for removing question details in August 2017. According to some users, the removal of question details limited the ability to submit personal questions and questions requiring code excerpts, multimedia, or complexity of any sort that could not fit into the length limit for a URL. It has become one of the most popular Question Forum specially in India, US and Canada. It motivates people to share knowledge and information.

According to Quora Answers, Quora uses Pylons and Comet, Ubuntu Linux and MySQL for its backend, operating system and database respectively. Nginx is used as a reverse proxy server and HAProxy for load balancing. Quora has developed its own algorithm for ranking answers. Amazon Elastic Compute Cloud technology was used to host the servers. PyPy was used to improve response time. (Source – Quora). Classification of questions was done by implementing Supervised Learning Models which include Naive Bayes, Logistic Regression, Support Vector Machine (SVM), an ensemble of Naive Bayes and Logistic Regression and Random Forest. Term Frequency–Inverse Document Frequency (TF-IDF) and Document Term Matrix (DTM) has been used for counting of words in questions. Siamese MaLSTM Neural Network model is applied for prediction of duplicate questions in the dataset of Quora.

Fig. 3 depicts ahrefs rank of the website which rank at 573; 69.1 M backlinks and 63.7 M organic keywords. According the rank it can be said that the website has high potential of raking in top and influence more people in number.

Quora is considered a creative venture that inspires inventiveness in writers which was made with Python programming language to construct this site. HTML, CSS and JS were peppered to Python. Though, the existing language serve Quora’s purposes there is concerning issue of high-security. Java was supposed to be used instead of Python for high security reasons. Adam D’Angelo, CEO of Quora (company) himself admitted that there was biggest issues with Python in terms of speed and the lack of type checking (Source – Quora).

According to woorank analysis meta description for Quora was found missing which encourages viewer to click through to the page. The site did not use web feed URLs which enables visitors to receive information from site. It can be also be used across network for product alerts, news, blog updates and more. The content would be delivered to the user in either RSS, ATOM, or JSON format. the path to robots.txt file is not allowed in the site.

Questions that have long been unable to receive any answer, opinion-based, need a debate to get the answers, or a valid answer does not exist, fall under Insincere question group. It is therefore important to weed out Insincere questions in order to maintain the integrity of the site. Quora have a huge number of such questions that can not be filtered manually.

Quora has insincere question which is defined as a question intended to make a statement rather than look for helpful answers. It has a non-neural tone, disparaging, fantasy, sexual content and not to seek genuine answers. These are because of binary classification problem for given question. The problem should be resolved through multi-layer convolutional neural network model which will help in reducing Insincere questions from the website.

Users can create questions and answer questions in the website. They can identify suitable answer of related questions and upvotes and downvotes. However, there is issue of identifying experts and non-experts properties. To detect the issue and fill the gaps there should be proper analysis of behaviors of experts and non-experts in popular topics, add user friendly features, quality answer features, linguistic features and features to detect experts automatically.

There is a real name policy in Quora to prevent fraudulent behavior in its users. But many user/writer has bad experience with real name policy. Lisa Hall, a Quora writer claimed she was denied access to his own account for name issue because she tried to alter her name though she did not change. She also complains about management due to irresponsive attitude of Quora management system in demand of justification.

Paulo P., a user of Quora said it crappy site which is moderated by bots. The site has list of policies, but no one enforce them. There are bad grammar and spelling used in both questions and answers.

Billy I., anothe user of Quora said that the website has unnecessary sign in policy. The site has policy to of allowing people older than 13. However, Billy says people belonging to 10-30 uses internet most. So, there should not be sign in policy to prove age of older than 13.  These are some concerns which need to be discussed and make the site more user friendly for each and everyone.

Fig. 5 shows global website rank of Quora which ranked at 372 by yesterday. However, 90 days before it raked at 268 which indicates raking of Quora has been falling. This supposed to be serious issue for Quora team because internet is open to all and there are many competitors.

The above figure (Fig. 5) clearly indicates that Quora is mostly used and influence in India, US and Canada. Percentage wise coverage of Quora is 66.22% in these three countries. To expand it, the site need to be global level user friendly proving no language barrier.

There are a number of reviews made for Quora in positive and negative side. Constructive criticism of any website should be made for making the site more user friendly. Some review made for Quora by Quora users are as follows –

One review says that Quora has two-fold problems. The moderation bots were badly programmed and there was low level control mechanism over writings. The other issue is with some of Quora’s human Moderators. I’ve seen Quora users get banned for speaking out about misogyny, harassment, racism, bigotry and other issues. Quora has lost thousands of highly intelligent and engaged users over the years due to these issues. Most reviews are one star. And some of the higher ratings are obvious fakes. If nothing is done to fix these issues, Quora will crash and burn.

Mark W., praised Quora in some aspects of it i.e. fun and informative but moderate is said brutal, broken, unresponsive and nonsensical. A user having 6 million viewers said he was banned by Quora saying he had multiple accounts which was against policy. On his appeal no explanation was given by management.

The Quora team should not ignore constructive criticism of users and try to resolve the issues to the site in top among other Q&A websites.

Quora is a question answering (QA) websites which play a crucial role in meeting users’ information needs. Users can create questions and answer questions. They can identify suitable answer of related questions and upvotes and downvotes. It is a fast-growing QA platform specially in India where users get quick answers to their questions at the same the experts can answer other’s questions. Nonetheless, there are many critiques with the website of unanswered questions for a long time, issue in real name policy, incorrect answers, high security, complain of ban of users and sometime programming functions of the website.

Importance of Iron for Health and How to Get It