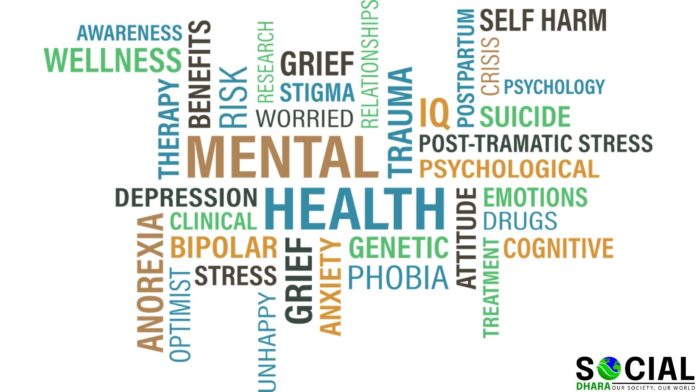 Mental health is not only associated with stigma but even talking about it is considered a shameful conversation. There is an under-reporting of mental health issues, but as far as the data suggests, about 11-18% (one in seven) people globally have one or more mental or substance use disorders, 4% are tackling anxiety disorders. And now that about 126 million people have had Covid-19, it must have had its ramifications on the mental health of the people.

India’s experience is, then, laden with more disillusionment and sorrow, as far as the past few months are concerned owing to a plethora of reasons – the swelling numbers of farmers’ and students’ suicides, public protests, economic downfall, online bullying, and trolling, as well as human rights abuses, lockdown, and deaths due to Covid-19.

After having said this, it is important to understand that mental health cannot be promoted overnight. It must begin as a collective initiative at the community level, focusing mainly on the youngsters. Good mental health cannot come via a few health clinics. Rather, it is good parenting, economic awareness, more independence, better education, gender equality, and social liberty that help achieve sound mental health.

Mental health, in itself, is a positive term. If one says that one is in a state of mental health, it would automatically mean that he/she is psychologically sound. However, when one says that one suffers from a psychological disorder, it means that there is a sort of irregularity or disturbance of the mind’s normal functions. What we will all agree on is that society is afraid of illnesses, i.e., psychological disorders. There is fear of acknowledging, treating, and even talking about mental illnesses. And this is the point where mental health is overlooked, ignored, and disregarded. Each one of us might be familiar with the feeling of being mentally unhealthy.

Mental health issues, most of the time, remain underdiagnosed and undertreated. In India, factors such as a lack of knowledge and awareness around this issue prevent people from seeking help. As per the National Mental Health Survey of India (2015-2016), the prevalence of psychiatric disorders among adolescents (13-17 years) is reported around 7.3%. A person can very well carry out his/her daily normal functioning and still be suffering mentally. The roles and responsibilities of a person are heavily conditioned and influenced by his/her upbringing, their interaction with the people around them, the parenting styles they have had, along the relationship with their immediate environment.

Of late, what also has been on a rise and has a sizeable impact on the mental health of the people ranges from insensitive media coverage of sensitive issues like rapes and suicides to competitive pressures to secure a job or do well in an examination, and even repugnant and offensive narratives on social media.

The stigma related to mental health can only be challenged when everyone plays a role in creating a mentally healthy community. This community shall reject discrimination, and shall be very supportive of inclusivity and recovery. One can help in a variety of ways:-

The inadequacy of India of not attending to or looking after the mental health of its citizens has led to serious consequences. The majority of the Indian population belongs to the lower spectrum of the socio-economical ladder of the society. They are the ones who are more prone and vulnerable to mental health issues, and ironically, they are the ones who have the least access to therapists, medicines, and doctors.

In middle and lower-income countries, as much as 75% of the people with psychological disorders (neurological and substance abuse) have no access to proper treatment, mainly because of the stigma attached to it. There is an untold urgency to have a better primary mental healthcare infrastructure in India and bridge the gap in accessibility to good quality and affordable mental health.

WHO’s Director-General Dr. Tedros Adhanom Ghebreyesus rightly says, “We are already seeing the consequences of the COVID-19 pandemic on the people’s mental well-being, and this is just the beginning.” He goes on to add that “unless we make serious commitments to scale up investment in mental health right now, the health, social and economic consequences will be far-reaching.”

It is now known that India spends a very small proportion of its GDP (Gross Domestic Product) on its healthcare infrastructure, and even a smaller subset on its mental healthcare. It is saddening to know that there aren’t enough psychiatrists to take care of or provide solutions to the productivity loss because of the mental health issues that people are struggling with. Nonetheless, what we can do is to look for creative and ingenious ways to generate and design initiatives to bolster psychological support for people. In a nutshell, apart from hygiene, the COVID-19 should also be taken as a wake-up call to shift the focus to good-quality, affordable, and accessible mental healthcare services.

Madhumita
Madhumita is a passionate writer. She holds a minor degree in Sociology. Her interest in writing is on current social issues. She is pursuing her bachelor's degree in ‘English Language and Literature’ from Delhi University.

Curiosity: The Key to Creativity