Places in Rishikesh to Visit 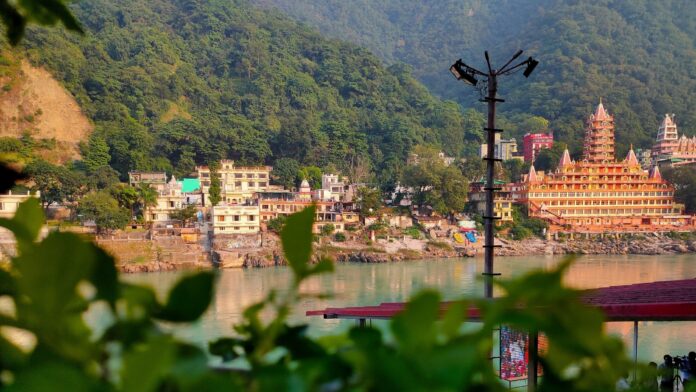 Rishikesh, the city of ambiance, is located in the state of Uttarakhand at the foothills of the Himalayas. It is also known as the “Gateway of Garhwal Himalayas”. Well, it is not unknown that it’s a Hindu pilgrimage city with temples and other religious significances to visit and that it has been home to thousands of worshippers and saints since time immemorial. The fact that this city has been re-popularised by the youth over the years is also not hidden. This gem of a city has started to give vibes of something more than a pilgrimage – a place to rejuvenate and jam! Youth has given this new definition to it. With tourism constantly bringing in young customers, the place has been developed in an all-friendly way. Setting up new cafes, unraveling of the adventures, and hidden gems coming out and being added to the to-do list, it has all happened and fast.

Rishikesh, the city at an elevation of 340m, is also the Yoga Capital of the World. Apart from having spiritual importance, this city is also known as the centre for meditation and yoga. There are many Ayurveda centres where healing methods for the mind and body are taught. It is the birthplace of the practice of yoga – the Hindu Spiritual Discipline. It is said to be the place for yoga and meditation of the Gods with a spiritual river, the Holy Ganges flowing along.

So let’s not keep you waiting and dive into the depths of the city.

The iron suspension bridge over the river Ganges is 450m long. It connects two districts – Tehri and Pauri. It is believed that Lord Lakshman crossed the river at this site with only two ropes and this bridge has been built to honor his brave act. This suspension bridge is now used for pedestrians and bikers and vibrates when bikes pass through it. Its serenity and scenic views are to die for!

Another iron suspension bridge connecting the Pauri and Tehri district hangs across river Ganges 3kms northeast from the town of Rishikesh. This bridge, although almost as same in length and structure as Lakshman Jhula, is slightly larger and is one of the most sought-after tourist places. It offers a panoramic view of the Ganges which makes it memorable.

There are several Ghats where the holy river the Ganges is worshipped. Saints and worshippers come together in large numbers and worship with aarti plates, flower petals, incense sticks, and diyas in positive enthusiasm. The atmosphere created with the enchantments is quite lively and pilo-erecting. Parmarth Niketan and Triveni Ghat are two very famous spots for Gaga Aarti in Rishikesh.

Neelkanth is the aspect of Lord Shiva which has blue throats due to the poison emanated during the churning of the ocean. This temple is dedicated to the Neelkanth aspect of Lord Shiva and is about 32kms from Rishikesh. It is a popular Hindu pilgrimage site and is surrounded on all sides by the valleys of Manikoot, Brahmakoot, and Vishnukoot. Influenced by Dravidian architecture, this temple has a mesmerizing structure worth gazing at.

Located at the heart of Rishikesh city, this ancient Mandir is devoted to Lord Hrishikesh Narayan. All wishes are believed to be fulfilled at this mandir with 108 prakrimas of Lord Hrishikesh on the day of Akshay Tritiya. This temple is not just an ancient temple but has its mention in many epic Hindu mythological stories like Mahabharat, Vishnu Puran, etc, and is a home to old age entangled trees. Vat Vriksha, Pipal, and Bail Tree are the three trees present here and believed to signify three Hindu Lords – Brahma, Vishnu, and Mahadev.

One of the most important places for religious ceremonies, this temple is dedicated to Lord Rama, the protagonist of the Hindu mythology Ramayana and his wife Sita. Its palace-like architecture does wonders to the eyes. It is located near Triveni Ghat and has a beautiful kund called Rishikund beside it. Rishikund is a holy pond and is believed to be built by Kubz saint. Legend says that GoddessYamuna has blessed this pond by filling it with her water. It is a solace place for relaxation and it is shadowed by many surrounding trees.

The name suggests it all! This multi-story temple, also known as Trimbakeshwar is a holy temple dedicated to several idols of the Hindu religion. It is a famous tourist spot and is also otherwise known as Kailash Niketan Temple. This ancient temple is believed to be established by Adi Shankaracharya, an Indian philosopher, and theologian, in the 9th century.

Although there are many temples in Rishikesh since it is a pilgrimage city, but they can easily be known when one actually visits the place. If you’re a youngster looking for some fun evenings and maybe some jamming, then stay on board because we are about to change the narrative!

Offbeat Places in Rishikesh no one Knows About

Yes, you heard us right! Rishikesh has its own marine drive and it is as beautiful as it gets in Maya Nagri Bombay. This marine drive will give you déjà vu if you have visited Mumbai for its structure and cleanliness is just alike. The scenic panoramic view of the Biaraj Lake just mimics the queen’s necklace. It is decorated with stylish gothic street lights and trees on both sides of the wide street built for the enjoyment of the pedestrians. The ultimate place for having some music, poetry and dance jamming sessions with your friends!

Although in the beautiful city of Rishikesh with hills and rivers, it is sure to watch some sunsets and sunrises that leave you in awe. But we have brought you a sunset point that is lesser know and definitely off-beat! Kyarki Sunset Point is located on the top of a hill near Neergarh Waterfall Road in Kyarki. Kyarki has beautiful hotels, cottages and even Air BnBs with amazing terraces and views! It is so worth it if you are looking forward to a slow evening with your friends or beloved ones.

Although youngsters have popularised it already, many are still unknown of this mysterious cave in Rishikesh called the Jhilmil Gufa. It is located near Manikoot Mountain. Dedicated to a devotee of Lord Shiva, Gorakhnath, this ancient cave holds many secrets. It is believed that Lord Shiva discussed Yoga with Baba Gorakhnath for a long time here. The structure of the gufa with a large hole on the top and sunlight illuminating it in a Tyndall fashion gives it a very auspicious look.

If you are a motorbike lover, you are in for a ride of your lifetime. This beautiful road called Chilla Dam Road connects Haridwar to Rishikesh. And even if Haridwar is not on your visiting list, this road can be driven for solely, the purpose of driving. How do they quote, “Only speed lovers will know it!” It goes through Rajaji National Park and runs alongside the beautiful river.

Located at Neelkanth Bridge Road, this waterfall is a quaint lesser-known place. With surprisingly clean water, this place is just 6.5kms ahead of Lakshman Jhula. One could also go hiking around the waterfall. It is also famous for the limestone caves located near the waterfall. In short, you are in for a nice summery day here!

Well, as we keep on insisting, you must visit a place to know it. It can all be read but never yet be experienced without a physical tour. So hop on the next train!

Also read: Caves in India to Visit: A Never-Ending List

Himani Arora
Himani Arora is a biochemist and a writer with a keen inclination towards travelling. She believes in humanity and feminism, and voices her concerns towards gender disparity and oppression of women throughout the world. She is currently pursuing M.Sc. in Sports Biochemistry at Central University of Rajasthan.