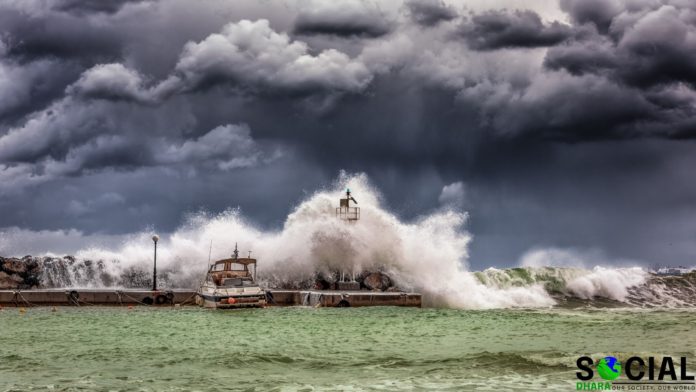 On 11th March 2011, a powerful earthquake hit the coast of Honshu located in Japan. In less than an hour after the earthquake, a tsunami swept over the coasts of this city. The waves went up to ten kilometers into the city.

Over 20,000 people died and ports and houses were destroyed. Along with the destruction of these, the nuclear power plant-Daiichi was affected.

This nuclear power plant had six reactors each of which was commissioned in 1970. Units 1, 2, and 3 were operating in the core unit, unit 4 had been unloaded and units 5 and 6 were in cold storage. These reactors operated on a different technology. The core was made of fuel assemblies containing uranium, which is then controlled by control rods introduced from the bottom. These rods can stop the fission process in case of an emergency.

When the earthquake hit the coast of Honshu, the tremors triggered the insertion of the control rods. This stopped the fission reaction but the residual heat had to be emitted or removed. For this process to occur, a power supply was required but due to the earthquake, the off-site power supply was lost. They resorted to using diesel generators to provide a cooling system to the reactors.

The complexity in the situation was that reactors 2 and 3 used turbopumps as a mechanism for cooling while reactor 1 did not have a turbopump, instead it had a heat exchanger. While the operators struggled to get the situation under control, a tsunami hit the coast of Honshu disrupting certain processes.

The tsunami waves went over the seawall and since the power plant was located on the coast of the city, water accumulated in the lower parts of the building. This disabled the diesel generator which was being used on reactor 1. If the operators were not able to get the cooling back on the reactor and rods would melt. Units 2 and 3 were battery operated but the battery would provide power for only 24 hours. Unfortunately, the battery ran out and the cores were no longer being cooled. The fuel heated the core up to a temperature of 2300°C and blended itself with materials from the structure to form a magma called corium. The corium pierced the reactor’s vessel and later fell on the concrete basement inside the containment of the reactor.

The steam in the reactor vessel was filled with radioactive elements and large amounts of heat. The water in the vessel did not cool down because the diesel generators were no longer functioning. The water began to boil hence reducing its filtration capacity.

In addition to these misfortunate events, hydrogen was escaping through uncontrolled leakage passages and was released into the reactor building and since hydrogen reacts violently with oxygen, an explosion occurred which destroyed the roof of the building.

After the first explosion, a second explosion followed due to excessive hydrogen build-up.

Four days after the tsunami, the reactors were extremely damaged due to the explosion and three units containing the core/control rods had melted. Reactor 2-which contained important radioactive materials were discharged into the atmosphere and the sea hence, contaminating both the air and the water with toxic materials. This discharge was an accident because the containment of these reactors was broken.

47,000 residents were evacuated due to an increased risk of radiation exposure.

This radiation leak contaminated the soils in eastern and north-eastern Japan. It greatly affected marine life as well. A fish-sampled test for high levels of cesium-134 and cesium-137.

Since fish excrete efficiently, the contamination levels in their tissue would decrease eventually but the greater problem at hand was that if these contaminated fishes are consumed by humans, it would cause illnesses on a massive scale.

Fukushima is still reaping from the effects of the explosion and contamination.

Karl Marx rightly said that we should not flatter ourselves too much over the conquest of nature because someday it will take its revenge and we humans do not have any authority to rule over nature. He also said that on one side we have environmental advocates and supporters who believe that the only way to solve the problem is to get rid of the man and on the other side we have men who only think about their gains and state that making attempts to curb pollution will be harmful to the economy.

He also says nature is the only reason man is alive. A man is linked to nature physically and spiritually. He is born in nature and dies in nature. He rightly states that society separates man from nature. Nature has become a medium for a man’s material satisfaction. For a man’s need and greed, nature is being exploited ruthlessly without any guilt or compensation.

Humans are not against nature but they only care about the continuity and well-being of their race and are willing to pay any price for it.

Comparing the Fukushima incident and what Karl Marx has spoken about, humans take nature for granted. Instead of trying to live with nature and accommodate, we only worry about our convenience and greed. We are willing to sacrifice the very medium that is responsible for life on earth. If the builder of the Fukushima Daiichi Plant had not compromised on building the containment wall and had taken extra precautions, the life of not only humans but also the aquatic and aerial animals would not have been disrupted.

If the prime minister of Japan, would have declared a nuclear emergency before the situation went out of hand, additional help would have been provided by different countries, especially by the United States of America.

In the case of Fukushima or any other nation for that matter, society and a man’s greed are leading to the absolute destruction of the environment as well as mankind. If perfect precautions are not taken, these radioactive elements can wipe out the entire planet. Another instance of a nuclear disaster was Chernobyl. This greed and selfishness will soon catch up to us.

A mistake will destructively affect us all or as said by Karl Marx, nature will take its revenge sooner than later.

Speaking of today, due to coronavirus and the complete shutdown of nations, we have come to realize the harm we have done to the environment. Seeing clear skies and breathing non-polluted air has made us realize the level of abuse on our part. But this realizing too has come at what cost? If the virus had not broken out, would we have realized the effects of our actions?

In conclusion, drawing from the incident of Fukushima and what Karl Marx has to say, we as a society need to be more aware and precautious of our actions. We know that our doings and mistakes are harming the environment. We need to learn to be aware of it and live with the environment. Instead of indulging in greed and selfishness, we should co-habituate with nature and find ways of not harming the environment to the extent that there is no point of return.