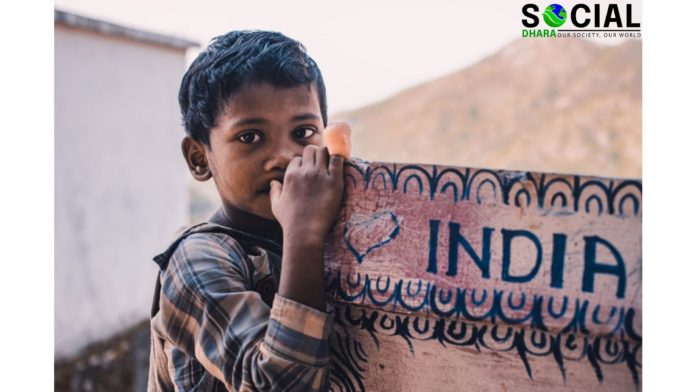 India has been facing many social problems every single day. With new challenges and new situations. Child Labour is a serious issue in India. Childhood is a memorable period for every individual because we do not have the pressure of work and responsibility.

Why child labour is common in India? India is the second-largest populated county in the world. People are facing unemployment, have no money and food. Poverty in India rising day by day in this pandemic situation people are losing their livelihood. Poor people who do not understand laws they send their child to do work and make some money for living.

Children are innocent they cannot understand what is happening to them. The International Labour Organization (ILO) describes child labour as “work that deprives children of their childhood, their potential, and their dignity, and that is harmful to physical and mental development”.

Folks who are illiterate do not refer that their children going to school. Instead of sending them to schools, they influence them to earn money. If people do not have enough knowledge of their rights and what is going around them they cannot teach their child properly. Thus, children cannot get an education, as an outcome, they lack behind in their life.

As claimed by the study, 32 million Indian children of age up to 13 years have never been there at any school, the majority of them connecting to the social disadvantage class. Researchers found that uneven access to education ascertains hundreds of millions of children remain trapped in child labour in evaluative countries including India.

Education is essential for every individual and it is everyone’s right, just like clothes and food is important for us, education is also important for a good and successful life. If you have proper education you know about your rights in society. And is it a powerful weapon to fight against child labour. It is a basic right that can’t be disallowed to anyone. Everyone knows that education is the key to a victorious life. It provides us information of the world throughout us into something much superior. Education can change our perspective of looking at life. And the most important thing, it improves individual independence and progress of the children.

The Government has put onwards many steps by organizing many government schools in the county as well as private schools. The  Government gives free education to children who are under the age of 14. So that even children connected to an undeveloped community can also go to school, who are not able to go to school because of their poverty.

Indian Government started many programs related to “Child Education’ such as “Sarva Siksha Abhiyan” known as SSA which intended for primitive education in India. This is not just the Government’s only responsibility it is ours too. If we can help at least one child to get an education, we can build a child labour free society.

Poverty in India can be clarified as a crisis when a specific section of individuals is unable to achieve their essential needs. Poverty glooms a lot of problems onto a child. Poverty is often mentioned as the main factor of Child Labour. It is widely understood that families will not be able to face if their children do not work.

The fortuneless children evolve as uninformed workers and earn a low salary in adulthood. So, poverty persists and the parents are compulsively sending their children to work and a child labour snare is built up.

The enhancing gap between the rich and poor, privatization of essential services and the neo-liberal economic policies are causes major sections of the population out of employment and without essential needs.

This contrarily affects children more than any other category. The Entry of multi-national firms into an industry without proper contrivance to hold them accountable has a direction to use of child labour. Poverty is the main element that causes child labour.

One of the most quarrel impacts of COVID-19 is the loss of jobs across the world. In India, COVID-19 is have left 120 Million without work as of May 2020. Besides, when schools lastly begin again, many people not have sufficient money to send their children back. As a consequence of this, and the loss of jobs of their parents, children may have to keep working for the family survival.

Even multiple children choose to work and earn money to adherence their families through this problem rather than go to school. One of the paths in which the Indian Government provided stimulation for children to go to school was by implementing the midday meal project in government schools since 1995. During the lockdown, The government had inquired states to make sure that meals were provided to students.

When migrant labours return to their rural communities, household poverty as an outcome of shortage of income and consignment will also contribute to an increase in child labour. The evacuation of the migrants has also helm to a lack of labour in the cities. The basic drives of the economy including agricultural, automobile and production sectors, and goods sheds, which rely primarily on migrants labourers, are worst affected.

As long as child labour is uncostly and cost-imposing many employers may benefit from these modifications to hire children as they have less bargaining power and are mostly incapable to compress their rights.

Illiteracy, poverty and unemployment are three main aspects that cause child labour in India. In The Indian constitution Article 39 (F) shows that children are given alternatives and materials to develop in health methods and situations of liberty and dignity and that childhood and youth are guarded against exploitation and moral and material pretermission.

Article 45 makes regulations for free and compulsory education for children, which is now well constant as a basic right to the children up to The age of 14 years, it also authorizations that facilities and alternatives for best educational boulevards be given to them. The social magistrate and economic authorization are strictly held as basic rights of every citizen.

In India there are many NGOs like UNICEF, CARE India, Global March – Against Child Labour, Child Rights and You, they have been working to deracinate child labour in country. Child labour can be over when knowledge is interpreted into provision and action, moving improved motive and ideas into protecting the health of children.

Child labour is both an economic drill also socially ill. It has survived in some from time primeval. Children are guiltless, permeable and dependent. They are all eager, active and full of expectance. Their life should be full of enjoyment and stillness, playing, knowing and growing. Their future should be built in harmony. Their childhood should be elderly, as they expand their potential and gain new experience. Give up on the children, saving a good foundation of life for them, is a sin against humanity.