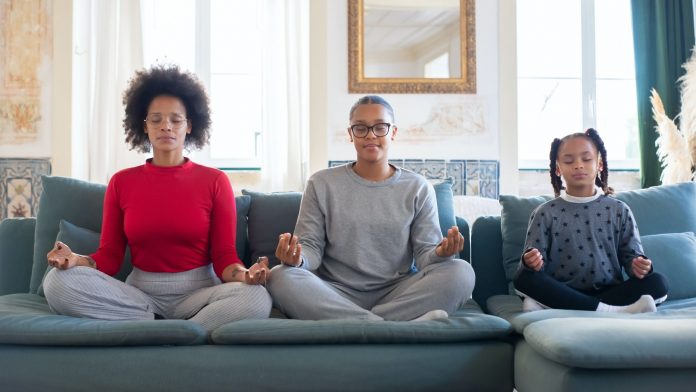 Yoga is one of the most auspicious spiritual gifts that the Indian subcontinent gifted the world. When the story behind the origin of yoga is unfolded, it goes back to the Indus Saraswati civilization which flourished along the banks of Indus before 12,000 years. Various artifacts found from the Indus valley show the motifs and carvings of individual yogis which confirms the presence of yoga in India. The word “Yoga” originated and got derived from the Sanskrit language which means to unite. Yoga promotes the unification of individual consciousness with universal consciousness which can be made possible when there is a perfect harmony between mind and body. Yoga is far more than practicing few postures (asanas) and meditation but is a way of life. Individuals who live this life and strive to attain nirvana or liberation are known as yogis and according to various ancient scriptures, lord shiva is the first yogi. It is believed that aadiyogi, lord shiva, poured the sacred knowledge to seven sages who later traveled the world unleashing the spirit of yoga and liberation.

The tradition of yoga can be classified under various time frames. The ancient period marked the origin of yogic traditions under great gurus like the great Sage Maharshi Patanjali, Panini who codified and consolidated yoga practices. The period also proclaimed the teachings of Buddhism and Jainism where yoga stipulates an important place. During the classical period of yoga, the ideas of Buddha and Mahavir spread like a fire inside and outside the Indian subcontinent. It was during this time when Vyasa commented on the yoga sutra of Patanjali which coined the relevance and importance of the same in attaining nirvana. Adi Shankracharya, Ramanujacharya, Madhavacharya along with the teachings of Suradasa, Tulasidasa, Purandardasa, Mirabai made yoga grow tremendously during the post-classical period. When it came to the modern period, Sree Ramakrishna Paramhansa, Paramhansa Yogananda, Vivekananda, etc were the pioneers and brought out the concept of Bhakti yoga to the world. But even in the current period, the concept of bhakti-yoga confuses people on the relevance of yoga in other religions. In the contemporary period, more are drawn closer towards experiencing yoga because of the teachings of past rishis and intellectuals.

The fundamental debate that revolves around yoga is regarding its religious orientation. There are various misconceptions proclaim yoga is exclusive to Hinduism alone. There are also other sects of people who see yoga as a practice for Hindus and add the tag sinners if a non-Hindu practices yoga. But in reality, yoga is not a religious practice or is not confined to any particular religion. It is scientifically proven that yoga can reduce stress and increase concentration which also helps in keeping the human body under control since the asanas focus on the complete well-being of an individual. Problems start when people add religious value to yoga. Yoga is more like therapy or exercise to increase one’s mental and physical health through which individuals can perform better in day-to-day lives.

The benefits of practicing yoga are enormous. A person who practices yoga under a guru acquires more physical as well as mental strength when compared to a normal person. Nowadays, many see yoga as merely an exercise for weight loss. But it is far more than losing weight. Yoga enhances fitness, helps in getting a better body structure, has cardiovascular benefits, helps in maintaining control over thoughts, reduces the chances for anxiety or depression, enhances concentration level, and it further helps in leading an extraordinary life with a strong mind and body. Yoga also helps to control overeating and issues caused by obesity. It helps to further lend a helping hand to other individuals who are suffering from any kind of illness.

The most important yoga sadhana (practice) is pranayama which consists of various mudras and breathing patterns. The sadhana focuses on one’s breathing and in later stages he or she can master their minds. The benefits of pranayama include reduction of blood pressure, increased concentration, widened lung capacity, etc. Another prominent and magical practice is sun salutation or Surya namaskar. It is a set of twelve postures that was created to pay respect to lord sun. it is as known as a complete asana. It strengthens the heart, promotes a balanced body, clears skin, stimulates abdominal muscles, helps the respiratory system work better, reduces fat, tone shoulders and spines are a few of the many benefits of sun salutation. There are hundreds of asanas like vrikshasana, trikonasana, bhujangasana, dhanurasana, sirsasana which helps to tone and energise entire body.

In the current period, yoga is widely trained in schools and institutions as the physical and mental health of students is at great risk because of modern life and practices. The ongoing pandemic has accelerated the importance of spreading yoga worldwide as the chances of anxiety, depression, obesity have doubled. Reports say that 1.39 lakh people committed suicide in the year 2019 out of which more than half were young adults in India alone. In the United States, the second cause of death among the young population is suicide. Since the world is moving forth at a rapid pace, it is high time to focus on individual health. The fast-food culture and desk jobs have drained the mental and physical capacity of the youth population around the world. Yoga is a perfect companion to counter the effects of modern lifestyles. It promotes and enhances individuals to lead a sound life with a strong mind and body.

Yoga – A way to think, breathe, and to move