All About Surya Namaskar 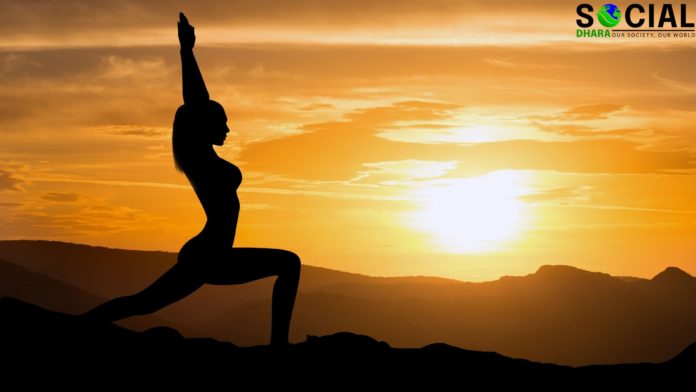 We are talking about ‘Sun’ who is also called Surya Bhagavan in the Hindu religion. He is the Prathyaksha Narayana (visible divine). He makes our lives visible with his light. We are seeing him every day with our own eyes but don’t realize that he is the reason for everything.

Do you ever wanted to thank sun but you don’t know how?

There is a procedure in Yoga to thank or to show gratitude towards the sun. That procedure is known as Surya Namaskar or Sun Salutation.

In which part of Yoga, we can find Surya Namaskar?

There are many classifications of yoga. But mainly they are divided into 6 parts.

Surya Bhagavan (the sun) travels from one end to another end of the earth on his chariot of seven horses. His duty must not stop.

Hanuman wanted to learn wisdom from the sun. Surya accepted Hanuman as his student on one condition. That condition is Hanuman must travel alongside him at the same pace all the time until he completes his learning. Hanuman accepted that challenge and learned everything from Surya and got precious knowledge.

Hanuman wanted to thank him. He performed Surya Namaskar spontaneously by chanting the 12 other names of Surya Bhagavan. This is how Hanuman introduced Sun Salutation to the world.

Why do we salute the Sun?

Sun providing each and every living organism and the non-living thing with an unlimited amount of energy. Some may argue there are other forms of energy sources too. But ultimately it is the sun that gives energy to those energy sources. If the sun wasn’t there for us there would be nothing, within a matter of time everything would freeze and everyone would freeze to death.

Sun pushes us out of ignorance and darkness to ultimate bright life. Sun glows and shines to make our lives visible. His light is our sight.

Surya namaskar is like showing some gratitude towards the sun for what he’s been doing for us. Besides, there are a bunch of advantages physically, psychologically, and spiritually.

Step by step procedure to do Sun Salutations

There are so many methods and procedures to do it. It would be better to follow a single type of procedure instead of trying different ones.

It is said that chanting the other 12 names of Surya Bhagavan while doing these 12 asanas can improve the benefits.

Stand upon your both legs and let both feet touch each other. Balance yourself on both legs equally by distributing weight. Join your hands at the center of the chest as you are praying. Keep your neck and back straight. Hold your breath while doing this Asan. This helps to attain balance.

Make your hands straight and put them above your head. Do not disturb the praying position which means don’t disjoin your hands while doing this. Make sure your ears are covered with the biceps on both sides. Now bend backward slowly from the waist. Keep yourself steady and don’t lose balance. Take a deep breath while doing this Asan.

Take your arms out of the praying position and make them straight. Now slowly bend forward. Keep your knees straight. Now try to touch your head to your knees and your hands to the ground. It takes a lot of effort to do. Regular practice can make this asan easier. While doing this asan leave your breath slowly.

Continuing the third position start sitting down and take one of your legs backward in a stretching position. Rest your hands on both sides of the non-stretching leg. Bend the stretching leg so that the knee touches the ground. Make sure you are looking slightly upwards and put all your chest weight upon the non-stretching knee. Take a long breath while doing this asan.

From the fourth position stretch the other leg backward. Put all your weight on both hands and toes. Make sure your body formed a straight line from the bottom of the leg to the top of the head. Look towards and the ground and leave out a long breath. This is a very similar position to push-ups.

Continuing the fifth position lower your chest downwards until it touches the ground. Then bend your knees and head to touch the ground. Now you can observe eight parts of our body are touching the ground. Head, chest, palms, both toes, and both knees. ‘Asta’ means eight. We do this asan by making our eight body parts touch the ground. That’s the reason why it is called Astaanga Namaskara.

Continuing from the previous position put your lower body part straight and lift your upper body part with the help of your hands. Looking upwards stay at that position for few breaths. Without forcing yourself to stretch your body. Most people know it as ‘Cobra pose’.

Now lift your waist upwards and make sure your lower body and upper body combined to form an inverted ‘v’ pose. This is known as mountain pose as you make a similar shape with your body.

This is the same fourth position but we have to stretch the other leg or opposite leg. Everything else is the same.

This Asan is the same as the third position without any changes.

This is similar to the second position.

This is similar to the first position.

NOTE: There is no specific order to chant those mantras. All of them are other names of Surya Bhagavan.

How does this work?

Sun is creating Solar Plexus which means he is generating the heat and maintaining the Synchronicity with the rest of the system.

The same kind of mechanism is there in our bodies. We can observe that we begin and end with namaste at heart while doing sun salutations. Because the heart is the Celestial sun in the human body. There is solar plexus inside us that maintains the network of blood vessels and nerves in the body.

This is how the solar system of the sun is related to the system inside our body and how the Surya Namaskar helps to maintain the plexus of the system.