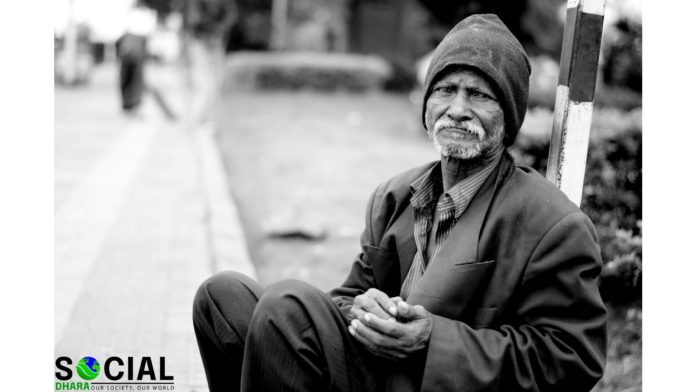 In a country which is known for its richness in diversity, it sure does have a lot of flaws which can only be seen when you look carefully. Poverty is the biggest one of them for decades has rendered this nation so vulnerable that it seems difficult to get back up.

The textbook definition of poverty is “the state of being inferior in quality or insufficient in amount” though means more than just being inferior. Poverty has a deeper meaning than just that. It means the lack of basic resources; it means a struggle for survival and the threat of even worse conditions constantly hanging on the head. It is the non-accessibility to basic rights and the exclusion from society. It is essentially all kinds of torment and despair in one lifetime.

Two-thirds of people in India live in poverty: 68.8% of the Indian population lives on less than $2 a day. Over 30% even have less than $1.25 per day available – they are considered extremely poor. This makes the Indian subcontinent one of the poorest countries in the world; women and children, the weakest members of Indian society, suffer most.2

How did this happen?

As we all know that India used to be a rich and prosperous country with an abundance of land, natural resources, and minerals. Then what exactly happened that changed it all?

The arrival of the British and their colonial rule looted India of all its riches and the economy crashed. They exploited the resources and people for their gain and made the lands useless due to the cultivation of indigo.

India saw a concerning increase in poverty during colonial rule. The country once called the ‘The Golden Bird’ due to the abundance of raw materials was now left in ruins and exploited to the maximum under British rule.

The colonial policies to make use of India’s abundant land made it vulnerable to famines and other natural crises leading to many deaths and low productivity.

From the late 19th to the early 20th, the British Raj prospered but at the cost of India’s economy. Famines and diseases during that time killed millions. Post-independence rapid economic growth did lead to a sharp decrease in extreme poverty but considering the population of India, there were still millions of people struggling to survive.

India is estimated to have one-third of the world’s poor and in 2012, 37% of the Indian population fell below the international poverty line.3

Impact on the society

Many sections of society are greatly affected by poverty in India. For example, children are forced into labor and are deprived of proper education so that they can earn for their families. Girls drop out of school and are married at a young age as they are considered a ‘burden’ to their families. Women and young girls are not given proper sanitation facilities which give rise to a lot of menstruation and child birth related diseases.

Poverty means lack of basic needs which includes food, water, shelter, clothes, and education Lack of clean drinking water causes many diseases resulting in the loss of human lives. This problem is so grave that as many as 76 million people have no access to safe drinking water and almost 21% of the diseases in our country are due to the consumption of contaminated water.

Lack of three square meals a day results in malnutrition and deaths among children before they even hit puberty. A solid shelter provides safety from natural disasters and extreme weather conditions. Poverty makes it difficult for people to afford a proper house for their family and is forced to live in slums, poorly built houses, or share rooms with a crowd giving rise to many fatal diseases in the area.

Education enables a person to become a decent human being. Lack of education gives rise to social evils like dowry, rape, harassment, violence, child labor, and child marriage, gender discrimination, and much more. These society evils rob people of their humanity and decency and affect them mentally.

What is being done to improve this?

The Government and many NGOs as well have done a lot to improve the situation such as various donations, charities, and projects for the upliftment of the poor and the eradication of poverty.

Many schemes and projects have been launched to create jobs and to alleviate the poor sections of society. Plans to give security in all aspects be it financial or housing has been put in action. Healthcare benefits and camps are regularly set up in rural areas for checkups as well.

NFBS started in August 1995 and was sponsored by the state government. This scheme provides an amount of ₹20,000 to the head of the family after the death of the sole earning member.

The scheme provides an amount of ₹6000 to pregnant mothers in 3 installments. It is for families which lie below the poverty line. The sum allotted for this during 1999-2000 was ₹767.05 crores and the amount used was ₹4444.13 crores.

IRDP was implemented in 1978-79. It aimed to alleviate families below the poverty line to eradicate extreme rural poverty. It planned to create sustainable opportunities for self-employment in rural areas. It was implemented only in a few selected areas when it was introduced but covered all areas by November of 1980. The target group under IRDP consisted of small farmers, agricultural laborers, and rural artisans who fell below the poverty line (i.e., annual income of less than ₹11,000).

PMAY was introduced in 1985 aiming to create housing for everyone. It planned to create 20 lakh housing units out of which 13 lakh would be in rural areas.

The implementation of all these schemes did alleviate and uplift the poor to some extent but there are still many who are suffering because of this evil caused due to debts and unequal distribution of money. There are also some ways we, the more privileged part of the society can help them. Donations, sponsoring a child’s education, charity, and taking part in NGOs who help the poor are some of the ways we can contribute to the eradication of this epidemic as well.

Poverty will always prevail as long as there are is an unequal distribution of wealth and people who exploit resources. We need to work together to change this and make this country a place where everyone has access to basic necessities and resources.

Vasundhara Rai
Vasundhara Rai is an intersectional feminist trying to learn more the society and sustainability. She is currently pursuing her Bachelor's in Business Administration from St. Aloysius, Jabalpur.