HomeSocialObservation: An evening at a village of 'Rural India'
Social 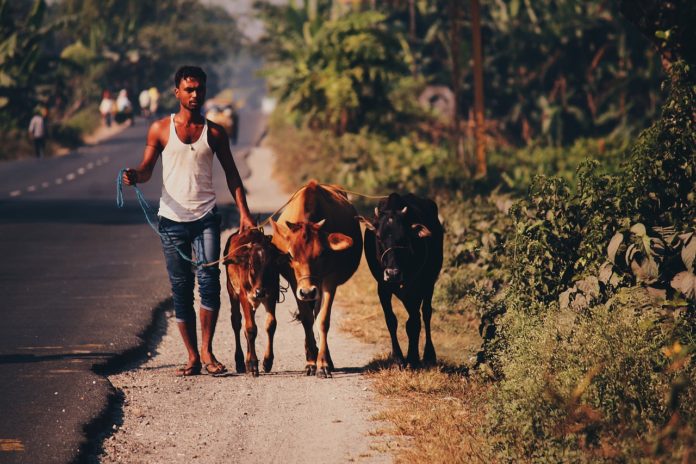 It was evening and the Children were cycling in the narrow lane which was the only part to enter the village and the lane was so narrow that even a small pickup truck can’t pass through it. The roads inside the village were kutcha road and in patches, it was cemented. Children who were riding bicycles seemed to have no problem with kutcha roads as they were enjoying. There was one Ram temple inside the village, where toddlers were playing with their mothers. The house adjacent to the temple seems to take regular care of the Temple, as the women who were cleaning the floor resided in this house. One teenage girl seemed to be reading something, maybe it was a sacred book (Bhagwad Gita). These activities seemed the villagers were living very simple life having faith in God. Apart from that mostly Hindu believers were observed, not a single person was noticed belonging to another religion.

There were groups of women discussing among themselves near a small pan shop which was the only shop in that area. The women were mostly of adult age. House type was ‘kutcha’ house mostly seen in the village made up of mud, bamboo, and tin as a roof, except four houses which were made up of cement concrete. The houses which were made up of cement concrete were constructed under Pradhan Mantri Awas Yojna-Gramin (PMAY-G), as it was written on those houses.  It seemed, there was no electricity in the kutcha houses as there were no electric poles connected near those houses. Almost all the houses had solar panels but most of them were not in working condition and were damaged. The solar panels were provided by the Gram Panchayat. It seemed that they did not have proper operation and maintenance of the solar panels system.  The boundaries of all the houses were made up of bamboo sticks, mainly due to the protection of cattle. Almost every house carries cattle breeding with goats and cows. Five houses seemed to be on the boundaries of the village and those were kutcha houses. These houses were from underprivileged communities. The women in these houses were cooking outside the house. They were using kerosene to burn up the sticks.

It was evening time; men were coming back from the agriculture field after a tiring day. Here, most of the household’s livelihood was based on farms, many of them were laborers working in the landlord’s field. Men were observed smoking Beedi (cigarettes) after coming back from a farm on Chabutra (main platform) of the village who were mostly adults categories people. No one cared about social distancing amidst the pandemic. Besides the platform, there was a primary school with damaged infrastructure having no boundary wall. The school had no toilets and no drinking water facilities for school children. There was no playground for sports and extracurricular activities. There was a requirement for the renovation of the school with basic infrastructure. Almost every house held a cell phone. Young age group people had a smartphone. The network was good for Jio and Airtel.

A group of girls was going towards the fields with a pot of water in their hand, which could be for open defecation. Open Defecation was observed because of the lack of quality toilets in their house. The sanitation facilities in the village were not appropriate and most of the households were practicing open defecation. All the houses were collecting drinking water from overhead tanks nearby village which was provided by Gram Panchayat through 14th Finance Commission. The capacity of the overhead tank could be 1000 ltr (written on the tank).

There was a house beside a panchayat that served country alcohol. Most of the adult men were going there to drink alcohol. One of the houses was of Sarpanch and he seemed to be financially doing well. There were differences observed between his and other houses of the village. He seemed to have acquired modern facilities like motorcycles. After two hours of observation, the village people were going to their own houses.  It seemed that the people of the village were busy in their daily lives and usual.

No doubt that the village was under-developed and impoverished as a result of neglected past legacies from the panchayat. The village dearth with the basic amenities such as proper sanitation facilities, school infrastructure, electricity, etc, still after the many govt initiatives is being implemented everywhere throughout India. The purchasing power of the rural population is throwing enormous demand for goods and services and will boost the village economy tremendously. Rural development is still the subject to come to the forefront after the economic reforms and rural livelihood and infrastructure development will serve as the backbone of this development.